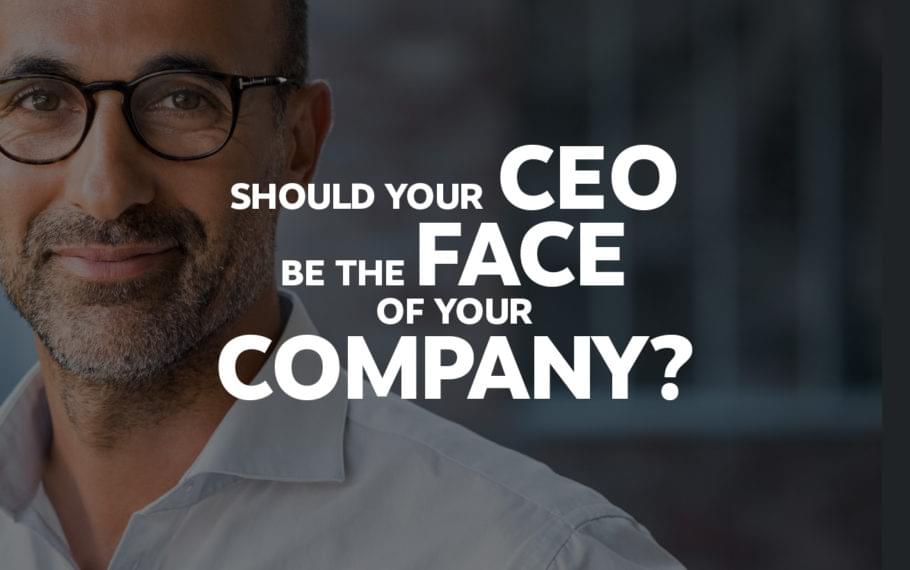 Who’s the best influencer to be the face of your company? Who will best represent your products, services, quality, and values in the minds of your consumers, clients, and customers? Should it be your CEO, CMO, employees, customers, or other?

Before I answer that question, some context.

A Brief History of Influencer Marketing

The traditional face of companies for the past 100 years has been a caricature, a fictional, made-up personality like the Maytag repairman, or more recently Flo with Progressive, or that Verizon guy.

There are powerful reasons for using a human face for marketing. A 2008 study showed that ecommerce websites that showed images with faces enhanced initial trust. Using human faces in marketing is a well-accepted practice not only when it comes to website design, it is the basis behind most influencer marketing.

For decades companies have also relied on celebrities (and their faces) to endorse products. In this sense, influencer marketing is nothing new, it’s as old as 1973 when Spencer Haywood signed on as the first athlete sponsored by Nike…and then made an $8B mistake by taking $100K cash instead of the offer of a 10% stake in Nike. Doh! 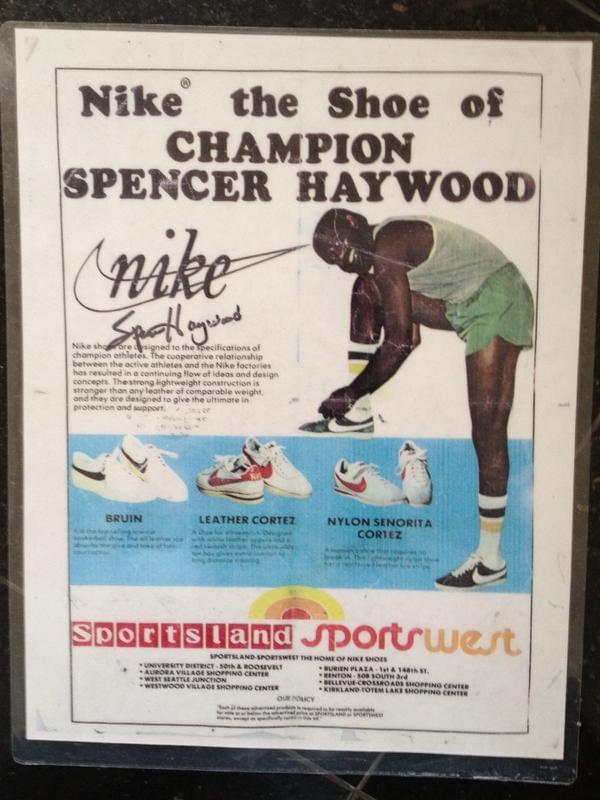 But perhaps influencer marketing goes back even further than that. Perhaps it started in the 1700s when Josiah Wedgwood became the official potter of the Queen of England, supplying her with fine china wares and reaping a handsome return from all the other poor folks who wanted to drink tea on the same type of ceramic as used by royalty.

In many cases, especially lately, the owner or CEO of the company has become the visible figurehead to market the brand. There is a proud history of inventors, founders, entrepreneurs, and chief executives who have served as the faces of their respective companies, including Andrew Carnegie, Thomas Edison, Henry Ford, Walt Disney, Bill Gates, Steve Jobs, Richard Branson, Meg Whitman, Jeff Bezos, Jessica Alba, and Elon Musk (ok, maybe not so proud, see below). In some cases, like Oprah, the personal brand is so strong we don’t think of a company existing at all.

Perhaps there is a bit of vanity at work, but there’s a functional reason as well. From a 2004 research paper by James T. Hamilton at the Sanford Institute of Public Policy at Duke University and Richard Zeckhauser from the Kennedy School of Government at Harvard University:

In a world of imperfect information, knowledge of a CEO may substitute for information about product or company quality. A chief executive’s reputation may become part of a company’s brand image, so that efforts to burnish the CEO yield returns to shareholders.

Perhaps you’re the CMO or VP Marketing and you’re thinking “No problem! We’ll make the CEO the face of the company, and all is well and we’ll reap the returns and retire to our private islands.”

What do you do when your CEO misbehaves? When Elon Musk smoked weed on a popular podcast Tesla’s stock price dipped 7% and when Travis Kalanick, Uber’s founder, got into a heated argument with one of his drivers, the video went viral and was at least partially responsible for Kalanick’s current title of “former CEO.” After his resignation from the post, Uber’s stock price took a dive.

Aye, there’s the rub, eh? Choose a good CEO who does a good job representing your company, and perhaps all is well, or at least you have a buffer of goodwill to weather the storms. Choose the wrong CEO to be the face of your company, and it’s a hard road to recovery if he (it always seems to be a he…oh wait, I forgot about Elizabeth Holmes at Theranos) messes up. It’s one thing for Subway to distance themselves from Jared’s egregious crimes, because he was just some random dude who happened to lose a lot of weight replacing McDonalds with Subway, but if it had been the Subway CEO caught with child pornography? Well then, that would have been a different matter.

Maybe instead of putting the CEO out front and therefore the company he or she represents at such risk, it’s better to have a professional marketer as the face of the company, someone who understands the nuances of PR and promotion a bit better, someone like the CMO or VP Marketing? It certainly seems to benefit CMOs to be in a position of public influence:

Influence enables an effective CMO to win support for initiatives inside a company. Influence helps a CMO reach customers, impress shareholders, and deliver ever-stronger brand performance. Influence is how a CMO shapes the marketing conversation as a whole.– 2017 Forbes report on the Top 50 Most Influential CMOs

Does the personal brand of a CMO rub off on the company as well? That’s tough to measure, but I ran some simple analysis and compared the performance of public companies in 2017 with marketers on the 2018 “most influential CMOs” list (including a few proxies like GM in place of Cadillac) to the S&P’s performance in 2017 and found an average return of 18.74% for the S&P vs. an average of 93.24% for those companies with highly influential CMOs. Conclusive evidence? Perhaps not, but interesting.

I’m not going to focus on this. Not because it’s not viable to turn your non-executive employees into influencers, it is, but it isn’t my focus. If this is what you came here for I recommend you go read this, this, this, and this.

Now back to our regularly scheduled programming.

Everyone is an Influencer

Rather than lay out all the reasoning behind one of the key points I want to make in this post, I’m just going to give it to you straight–everybody should be the face of your company. The CEO, the CMO, and everybody else in the C-suite, even that number-crunching CFO and the COO who says “Leave me alone, I just want to get stuff done.” Every one of your employees, at every level, should be an influencer, and every one of your customers should be as well. Nobody can be allowed to say “This is just a job, I’m just doing my job and collecting a paycheck,” because guess what? Your competitor is going to turn all their stakeholders into influencers, and then who will have the advantage?

Here’s another key point–you don’t make anyone into an influencer. Customers, employees, executives–they’re already influencers. So are you going to guide them where you want them to go, or let them run wild? The one thing you can’t do is stop them, because we’re all influencing others, all the time. “Don’t post anything on social media,” is not the absence of an influencer strategy, it is a strategy, one that says, at best “We’re trying to preserve the confidentiality of our clients and get good work done,” but more often than not sends the message “We’re trying to hide something.”

The only winning strategy is to embrace the fact we’re all influencers, and intelligently channel that influence to meet your objectives. As with all matters of leadership, it should start at the top.

How to Turn Your Executives Into Effective Influencers

What is the point of turning your CEO into an influencer?

Personally my favorite objective is growth. All other activities can fall underneath that umbrella. However, make sure there is a clear and logical thread connecting any personal branding or influence related activity the CEO is expected to fulfill. Nothing should be done merely because it seems like a good idea that may be helpful.

Define your objective first, have a reason for doing this, then move on.

2. Make it a priority

Your CEO and CMO and every other executive is already an influencer. If you want to make them effective influencers for your brand, the #1 challenge you’re going to face is their time, or lack thereof. It will never be convenient for your CEO to become active on LinkedIn, talk to the press, deliver a TED talk, write a book, or host a podcast. It wasn’t convenient for Steve Jobs to take the first investment in Apple and plow it into a PR firm instead of hardware, but he understood that PR is mission critical, and we all know how that worked out for him and Apple.

If your CEO doesn’t have a sense of her identity or her audience, it will be difficult for her to take any of the other steps related to building a personal brand and becoming more influential. Check out my personal brand tagline checklist for more on this.

Your CEO needs a personal brand support team. It may be a full time employee or an outside contractor or coach, but somebody needs to be poking and prodding the CEO to stay on top of things, otherwise other priorities will crowd out influence time. Ideally, each executive would have a full-time personal brand manager whose sole purpose is to build the chief executive’s influence according to predetermined metrics.

Influence cannot be created without content, and everything is content. It’s not just blog posts, press releases, books, speeches, videos, interviews, and social media posts. What the CEO does, what she doesn’t do, what she says, what she doesn’t say, her example–it’s all content.

Building influence works better with systems, which the dictionary defines as “a set of connected things or parts forming a complex whole.” Your CEO needs a content system, a repeatable method for content creation. The CEO should not manage it, the personal brand manager should. The CEO’s job is to provide creative input and strategy and where necessary, the content. But the system should be as hands off for the CEO as possible to lower the cost of this investment.

One of those “connected things” in that content system is a content calendar. I sit down with my content creation team once a month for an official content strategy meeting. It includes my EA and my partner and COO. We decide on objectives. We decide what type of content will help us meet those objectives. We discuss ideas for specific blog posts, social media posts, and more. We map out content for each business day for the following month.

Each Monday is my content creation day. I work all day on content, creating as much as I can for the week, and if possible, I get ahead and create content for following weeks.

Content that is 81% done and published is better than content that is 99% done and unpublished. I say 81% because 80% might cause some damage, so if you’re running out of time, spend a little time making sure that blog post won’t hurt anyone, get it 81% done, and publish it.

Follow these steps and I’m not going to promise your CEO will be Richard Branson or Oprah anytime soon, but you will see their personal brand grow, and with it, your company.

Need some assistance turning yourself or someone else into an influencer for your company? There’s a coach for that.