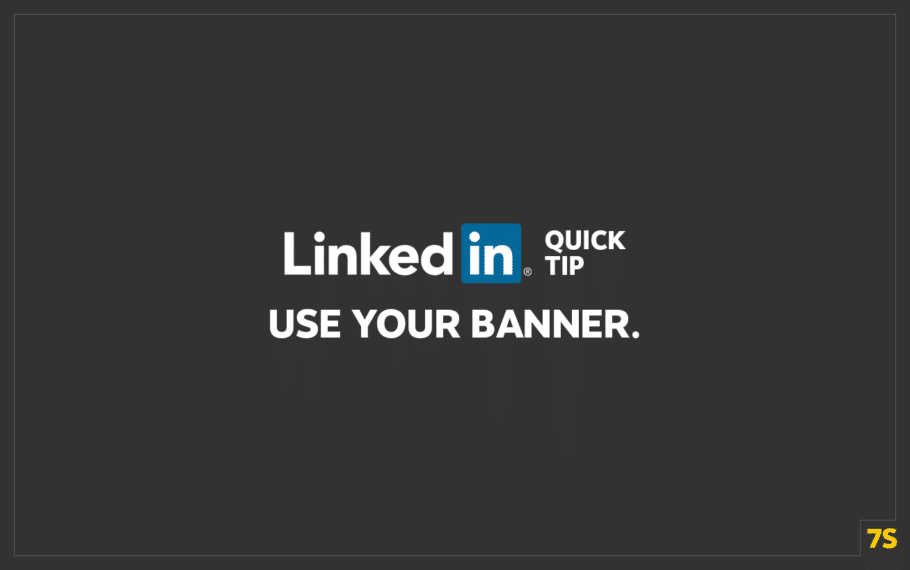 Your banner is that big horizontal space behind your profile photo. If you haven’t uploaded anything, it’s a default blue design, like this:

Except without the sad emoji face, I added that.

You may have thought about using that space before and then thought “Bah, I’m not a designer, and who cares what I put there? If I put up a photo of a landscape or a fish or something, what difference will it make?”

That is, putting a photo of a landscape or a fish or something artsy–but meaningless, will not make a difference. It also won’t make a difference if you buy a $5,000/month billboard and put up a photo of a landscape or a fish. And yet people pay thousands of dollars each month to rent billboard space. Start thinking like those advertisers and ask yourself what you would do if you had a free $5K/month billboard spot, because that’s what LinkedIn is giving you, and you’re leaving it with that default blue/blank graphic or putting up a landscape or fish picture? Time to put that real estate to use.

I can’t tell you exactly what to put in your banner space on your LinkedIn profile, but I can tell you this–it should:

Here are some good banners, and some thoughts on why they’re effective:

Shows Alex in a studio setting, reinforcing her personal brand of being a personal branding expert. It’s also a high grade photo, she’s got a nice personal brand logo, and it all comes off as very professional and classy.

Uses colors that match his latest book, and he shows his book in his banner, so if you’re familiar with him because of his book, you know you’ve come to the right place when you land on his profile. This banner couldn’t be more on-brand.

Like Dave above, Allen’s banner is super on-brand and also markets his book. I bring up Allen’s banner for another reason, however, which is that a lot of people know Allen because of his LinkedIn videos, and it would be easy for Allen to say “Gee, I’m so well known for my videos, I should put something about that in my banner.”

This would be a mistake.

It would be a mistake because the way to build a powerful brand is through focus, and if you put two separate things in your banner, you dilute your focus, and your brand becomes weaker as a result. Choose one thing and stick to it in your banner. There are other places on your profile to get more detailed.

Michaela is a great speaker, and she does a ton of speaking, and it’s about LinkedIn, so what does she have in her banner? Her on stage speaking, and one of the images includes LinkedIn in the background. On-brand awesomeness.

Dr. Wiechowski’s banner might seem busy to you, but it works to build her credibility. Sure, it’s not “clean” design like Dave Asprey’s above, but that’s ok, this gets the job done. Do you have authority points you can put in your banner? And no, you don’t need a ton. If they’re publications, five is the minimum. Anything less makes it look like that’s all you have. Same goes clients. However, if you’ve spoken at TED or TEDx, you could put an image of you speaking up, and just that one logo.

Good photo, and Rachel then tells us what she’s about with the text. She’s also working to copy her audience over to her other social media channels. I have mixed feelings about this, mixed because I could be for or against it depending on the intent. If it’s merely “I want to let people know I have other channels I’m on,” that’s not enough, especially if those channels don’t have the same focus. If people follow you on LinkedIn for a certain type of content you’re putting out, and you push them to your other social channels, they’re going to expect similar content over there. Gary Vaynerchuk is very consistent this way–you get more or less the same stuff on all his channels.

Mike is the founder of Social Media Marketing World (no biggie if you don’t know about it, it’s only the biggest social media marketing conference in the world) and I love his banner because it’s on-brand in a way that works so well for him. He’s obviously at his conference with a bunch of big name speakers, and I love that the other phone is in the picture since it allows us to imagine it’s going up on social media. The phone is great art, because it gives the image depth. My college art professor Leon Parson taught me that the best art doesn’t reveal itself all at once. You see the main thing everyone else sees, but then you notice something else, and something else, and a year later, you notice something else you never noticed before. The human eye is drawn to the human faces because they have the most detail/contrast (plus we’re hardwired to focus on faces) and then the phone later. Maybe you didn’t even notice the phone until I mentioned it.

String uses her banner to reinforce her personal brand as a LinkedIn video expert, and not just a video expert, but specifically a daily video expert. Oh, and she’s got this inside thing about fried chicken. It makes people curious.

I use my banner space to show a photo of me speaking in front of an audience, because public speaking is a large part of what I do. In the past I’ve also displayed media logos from publications I’ve been featured in as a form of social proof/authority points.

Ready to put your banner space to use? Do it, and then come back here and leave a comment with a link to your profile and I’ll give you some free analysis.

Any questions? Ask away.