I love Twitter. But their stock has been hammered lately. It has lost half of its value in the past four months alone. Meanwhile, Facebook is down a bit, but doing ok. Stock value is (theoretically) based on future revenue. If investors think a company is going to make more money in the future, they buy that company’s stock, and the value goes up. If they think the company is going to make less money than expected, they sell the stock and the value goes down. Sometimes investors get it wrong, sometimes they get it right. In this case are investors getting Twitter right, or wrong? It’s hard to say a company that is doing $2.5B and had 61% growth between the first and second quarters of 2015 has a revenue problem, but as the Wall Street Journal put it:

Based on my recent experience using Twitter ads which I detail below, I’m inclined to believe, though not convinced, that investors are right to devalue Twitter’s stock.

I run a digital marketing agency. One of our clients is Beardbrand, which sells grooming products for men with ample facial hair. We recently proposed a marketing campaign to them, the results of which I have detailed in the post I Posted Something On BuzzFeed. You Won’t Believe What Happened Next. We created images of 10 U.S. Presidential candidates with beards, posted it to BuzzFeed’s community section, and then used social media amplification to get the post moving. Because the campaign wasn’t endorsed by Beardbrand, who eschews anything related to politics but said we could post it as a “rejected marketing campaign idea,” it ended up being a non-marketing, marketing campaign that turned into more of a personal experiment where I was free to test out various marketing tactics to see what would work best.

That graphic pretty much says it all. I got large spikes in traffic from Facebook, and no noticeable spike from Twitter, given that the traffic being shown where the Twitter circle is located is what normal traffic has looked like on a daily basis.

But it would be premature for me to measure success based on what I paid per website click from the campaign, because that only shows part of the picture. In the case of Twitter, the 104 clicks are all the clicks I got from the entire campaign. But Facebook’s reporting only shows me the clicks for which I was billed. If someone were to reshare my post, and then it gets clicked on, that wouldn’t show up in ad reporting. And that’s where the real difference exists between Twitter and Facebook.

Unfortunately BuzzFeed doesn’t give me the granularity in reporting I’d like to get from their system, but the results are so stark we don’t need it. This graphic shows performance of the BuzzFeed post during its lifetime, including referral traffic sources: 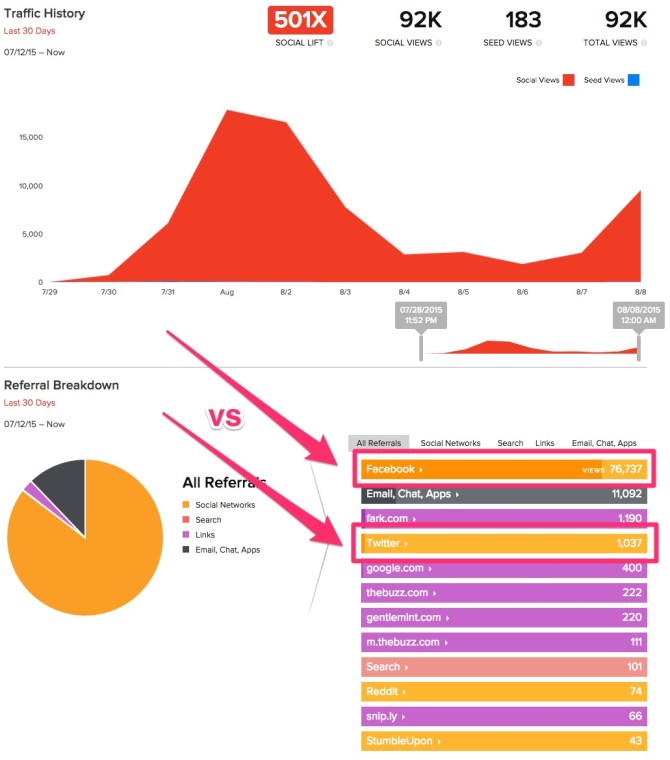 Yes, I know. Maybe I didn’t set up the Twitter ad the optimal way. Maybe I could have made the ad better for getting viral sharing. I admit–I’m not an expert when it comes to managing social media ad campaigns. There are people at my firm who are, but this was just me having fun with an experiment. But that’s the point–a lot of people using Facebook and Twitter for advertising also aren’t experts. If their first experiences with Facebook and Twitter are similar to mine, which network are they going to use in the future? Twitter’s challenge from its inception has been that it doesn’t immediately make sense to normal people. If their ad system suffers from the same problem, that’s a recipe for limited revenue.

This was not a very scientific experiment. In addition to the problem noted above, here are a few more problems with it:

I’m probably missing a few more. Or as Twitter investor Chris Sacca put it after reading this post:

@joshsteimle There are so many factors that would influence your example that it’s not really worth diving into. No hard feelings.

Fair enough. Still, based on the huge disparity between results, I would be inclined to use Facebook as my go-to for the next social media ad campaign I run, rather than Twitter. Are other advertisers having the same experience? Would most amateur advertisers do the same? And therein lies Twitter’s revenue problem, or opportunity, if you prefer the more positive spin. How to fix it? That would appear to be a problem for Jack Dorsey to figure out. Suffice it to say, Twitter needs to figure out how to provide more value to advertisers, and that means making it drop-dead easy for advertisers to make their tweets go viral, as Facebook has done. If that’s just not possible due to inherent limitations of the system, then Twitter has an inherent challenge when it comes to making money, at least relative to Facebook, whose 2015 Q2 earnings exceeded $4B. Perhaps there’s nothing wrong with that–they can still be a multi-billion dollar business, but they’ll always be a minor player relative to a giant like Facebook which can provide more value to its advertisers, and therefore derive more revenue from them. A standalone app, like Instagram, rather than a platform like Facebook. But again, we’d all be happy to own a chunk of either Instagram or Twitter.

I would love to see Twitter solve this challenge. In part because as an advertiser I want a platform I can get more value out of, and because as a Twitter user I love the service and want to see it thrive.

What do you think Twitter could do to improve their advertising system?