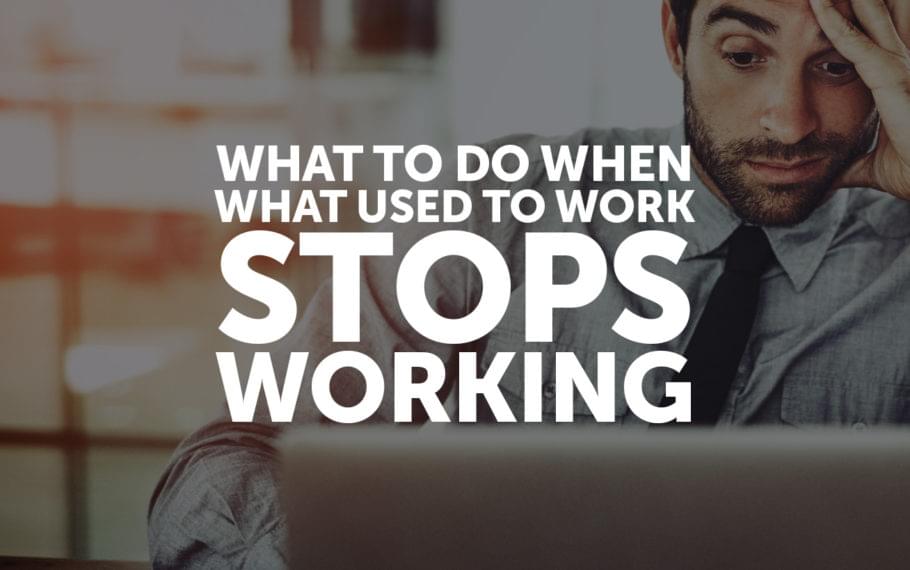 LinkedIn recently changed their feed as well. Two months ago I could have put up this post, in which I’m giving away five free copies of my book Chief Marketing Officers at Work (yes, as of this writing you can still enter to win), and I would have had the 100 comments I was going after within a few hours.

This was inconvenient for me, since I was in the middle of working on an online LinkedIn masterclass, and not only did this mean I had to change my content for the online course, but utilizing the LinkedIn feed’s organic reach was also a key way I planned to market the course. Doh!

So what does one do when what used to work stops working, whether it’s in marketing, sales, writing, influence, leadership, parenting, fitness, investing, or anything else?

Here is a 6-step plan for overcoming the challenge when success evaporates that goes beyond simply saying “Try, try again.”

Don’t just do something, stand there! – Martin Gabel

Before you fly into a flurry and spend your time and effort on the next steps, pause for a moment, examine the situation, and make sure you’re not missing something. Are you 100% sure what you were doing before will no longer work? Could it be temporary based on unique circumstances that will soon return to normal? Is there something small that has changed which can be fixed easily?

Consider all the options before going negative and assuming it’s a complete loss with no alternative but to scrap everything and start over from scratch.

In his best selling book Who Moved My Cheese?, author Spencer Johnson tells a story about mice who find a treasure trove of cheese in a maze and how they react when the cheese runs out. Some mice complain about the loss of the cheese, try to figure out who to blame, and wait in the hopes that more cheese will materialize. Other mice move on in search of new sources of cheese in the maze.

The quicker you let go of old cheese, the sooner you find new cheese. –  Spencer Johnson

You used to have a lot of success on Twitter but now nobody responds or retweets anything you post? You used to be able to easily fill up webinars with Facebook ads but those have gotten too expensive? Don’t leave the pile of gold you’re sitting on if the gold is there and just needs a little more work to reach, but if the gold is gone, don’t be afraid to move on.

When something stops working it can feel as though we did something wrong, that we failed, even if the real cause is completely outside our control. Negative feelings can feed a sense of shame which can cause dangerous paralysis.

Shame corrodes the very part of us that believes we are capable of change. – Brené Brown

If you allow shame to take over, you may not only lose what success you were enjoying, but the ability to produce more of it in the future.

Appearing on Oprah, Brown explained how shame requires secrecy, silence and judgment in order to grow, but that we can fight back against a “shame spiral” with these three steps:

Double checking is one way to stay positive, but if a second look fails to reveal an easy solution then a positive attitude is that much more important, since you may have some hard work ahead of you.

Positive self talk and affirmations can help, but if repeating to yourself “I can figure this out and I will succeed,” becomes tough to do, follow the recommendation of executive coach and Forbes contributor Melody Wilding, and ask yourself questions like:

This type of solution-oriented mental exercise will keep you moving forward.

To achieve major success in life, you must accept 100% responsibility for your life and results. – Jack Canfield, Author, Chicken Soup for the Soul

We often think about taking responsibility within a negative context associated with fault, shame, and blame. Instead, focus on the fact that when you take responsibility for a situation, you are saying “I have the power to change things for the better.”

Even if you can’t do it alone, you can be the catalyst that makes things happen where they otherwise wouldn’t.

It all leads to this step–finding a new source of success. What’s it going to be? I can’t tell you, but what I do know is that if you understand why what you were doing stopped working, let it go, don’t let shame paralyze you, stay positive and keeping moving forward, and take responsibility for your success, then you’ll figure it out.

Commit to Principles, Not Tactics

Gary Vaynerchuk’s a great example of this–he doesn’t get hung up on the tech (the standard language warnings for Gary definitely apply to this video). Sure, he invested his time and literally his money in Twitter and built a huge audience there, but that didn’t keep him from also becoming an investor in Snapchat and building a platform there. Oh yeah, he’s also an investor in Facebook, which owns Instagram, where Gary also has a huge audience. Is he diversifying his risk? Is he just chasing every shiny object? No, Gary doesn’t chase after tactics, he has a guiding principle–go where the attention is, or rather pull a Gretzky and go to where the attention is going to be.

My own guiding principle is “create content people find inspirational and useful.” LinkedIn has thrown a wrench in my tactic, but they haven’t damaged my strategy. I’m still diagnosing to see what tweaks might produce the results I want with the system as it is today, I’m hopeful LinkedIn may tweak the system in the future to restore the results I was getting two months ago, and I’m also investing in tactics that have nothing to do with LinkedIn.

Circumstances may slow me down, but I can’t be stopped.