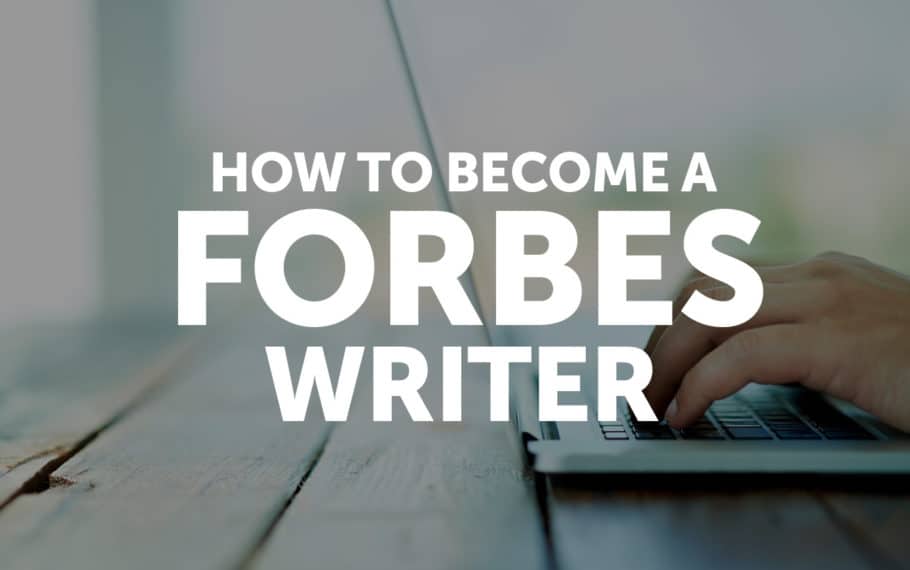 Between 2013-2016 I wrote 164 articles for Forbes as a Forbes contributor. [Note: Contributors at Forbes are unpaid writers, domain experts with day jobs, as opposed to staff writers who are full time employees of Forbes. More on this model here, here, and here.] It has been rewarding for both my personal brand and my digital marketing agency, MWI. It has led to other writing opportunities with publications like Time, Mashable, TechCrunch, Entrepreneur, Venture Beat, Fortune, ClickZ, Search Engine Land, and the South China Morning Post, to name a few. I loved doing it (I stopped writing for Forbes in early 2016), and am grateful to have had the opportunity. I got lucky. I never asked “How do I become a Forbes writer?” The opportunity came to me through a friend and was dropped in my lap. However, since I started writing for Forbes, “How can I write for Forbes?” has become the most common question I’m asked. Let me tell you how it happened for me, and then I’ll tell you how you can make it happen for you.

How my relationship with Forbes began

I started blogging around 2001. I have always loved writing. I write for myself, primarily, and to this day am always pleasantly surprised to discover that anyone else reads, let alone enjoys reading, what I’ve written. I do not consider myself as a true journalist, although I have referred to myself as one in order to get into events for free. I consider myself a rank amateur, someone who is virtually untrained. Yet I love to write, and will take any opportunity to do more of it. For over 10 years this blog was the only outlet I had for my writing, with a few minor exceptions.

That all changed in early 2013. I was in a meeting with my friend and fellow Forbes contributor Cheryl Conner and asked her “How did you start writing for Forbes?” I was merely curious. I thought it was pretty cool that she had that platform for getting her ideas out. Cheryl explained the contributor model to me, and told me that her editor, Tom Post (recently moved on from Forbes), would be in town soon and she would introduce me to him. I didn’t think too much of it, but figured it would be a good opportunity. Little did I know.

I met Tom at an event at Weber State University in Utah, where the topic was the future of digital journalism. Tom spoke, and afterward Cheryl introduced me to him. I was surprised when he said “I’ve read your blog and the article you published on Fast Company,” (Cheryl had recently helped me get that published there). Tom continued, “I wish that Fast Company article had been in Forbes. I’d like you to write for us and post the same type of content on Forbes that you post on your own blog.” I was surprised and flattered. I hadn’t expected Tom to know who I was at this point, let alone have read my work and be prepared to give me this opportunity. I told him I’d love to write for Forbes, and that was the beginning of it all.

164 articles later, I’m no longer publishing work on Forbes, at least not directly (I still occasionally pitch articles to other writers there on behalf of clients), and I provide coaching services for influencers who want to grow their personal brand, which often includes becoming a contributor to Forbes. I’ve helped people get into contributor positions at many publications including Forbes, Mashable, and Entrepreneur.

Getting in can take a lot of work and more than one try. Here are my best tips on how to make it happen.

You are now well prepared to pitch yourself as a contributor to Forbes. Let’s do this!

There are 1,500 contributors at Forbes. That might sound like a lot, but for every person writing for Forbes, there are 1,000 who tried and failed. Most fail because they don’t prepare, and when they pitch, they pitch poorly. If you follow the steps I’ve outlined above you’re already in the 1%.

To show exactly how easy this can be, I just received this email from someone I’ve been communicating with who was able to get his boss into Forbes as a contributor.

It was really pretty straightforward. I sent an email with a list of potential titles to [editor] saying that my CEO wanted to write for him. He responded pretty quickly asking for drafts of a couple of them, so I sat down with my content writer and wrote some outlines for [CEO] to fill in with his experiences. We went back and forth to edit the style to what [editor] was looking for. His biggest criticism was that we needed to embrace the struggle of entrepreneurship more. Once we’d produced a few pieces he was happy with, he set us up in the Forbes platform and sent us the publishing guidelines. We just published our second piece.