I’m currently at work writing the next installment in Apress’ “At Work” series, tentatively titled CMOs at Work: How Top Marketing Executives Build Customer Loyalty. The book follows the format of other books in the At Work series, which is that it will be a collection of interviews with leaders in its respective space. In this case, that means CMOs, VPs Marketing, and other top marketers. So far I’ve conducted interviews with CMOs from Spotify, the Harvard Business School, Domo, and Audible.com. Other interviews are scheduled or in the process of being scheduled. The book will contain between 20 and 30 interviews total. Here are some insights into how I’m going through the interview process and what I’ve learned.

One of the first things I’ve learned is that there are some benefits to creating a book that is based on interviews.

To get started on interviews, I had to decide who I wanted to interview. Given that I have to produce 20-30 interviews, and I have limited time (all interviews must be completed, transcribed, edited, and submitted to my publisher by December 15th), I have to move fast, and that means contacting more CMOs than just 30, since many of them won’t be available. Here how I created a list of potential interviewees.

In Google Sheet I created this list. I started brainstorming a list of CMOs and other top marketers I’d like to interview, mostly by starting out with a company name. The screenshot above only shows a handful of the 169 potential interviewees I have come up with so far.

Once I had a company name, I hired an online researcher in the Philippines via UpWork for $5.56 per hour to go find details. She filled in as much as she could, and I filled in the rest as best I could. I then added the columns on the left to rate each candidate. I haven’t stuck to these ratings because they aren’t perfect, but they have been helpful in prioritizing who to reach out to first. But who I have reached out to first has also been heavily influenced by my personal network. This has truly been a case where it’s not what I know, but who I know. For example, last year I was contacted by a PR firm to interview Sunita Kaur, the managing director for Spotify in Asia. That resulted in a Forbes article, interviewing Sunita for Startup Grind in Hong Kong, then I interviewed Sunita in front of an audience at CommunicAsia 2015 in Singapore. Because I had developed a relationship with Sunita it was easy for me to reach out and ask her if she’d be willing to introduce me to Seth Farbman the CMO at Spotify. She was happy to do so, made the necessary introductions, that interview with Seth went splendidly. For Brian Kenny at the Harvard Business School, I reached out directly through his email which was publicly available. For Heather Zynczak at Domo I talked to a friend who works at Domo and he got me an intro. For Louis Gagnon at Audible.com I reached out directly through their media relations contact on the website. Getting a few high-profile organizations and names in the book has lent it credibility to get more interviews in place.

Setting up interviews involved giving the interviewees a hint of the questions I might ask. You can see these questions here. I also sent them a release form they would need to sign so that their remarks could be published. The interviews so far have been done over the phone using UberConference and Switch. UberConference is an easy conference calling solution–no pin, the interviewees just call in to the number, and I’m already there on the line. The service also sends out an invite via email when I schedule the call and puts it on their calendar and mine. UberConference automatically records all calls and then sends me an mp3 file, and Switch has a recording feature as well. So I double-record all interviews, just in case one or the other don’t work.

24 hours before each interview, I follow up by email to confirm the interview. During the 72 hours before the call, I do research on the interviewee. For example, in the case of Seth Farbman at Spotify, he was previously the CMO for the Gap. That’s a pretty big deal, and I wanted to make sure that was addressed in the interview and that we talked about how that experience prepared him to be Spotify’s first CMO, and what lessons from the Gap transferred over to being the CMO of a streaming music company.

For each interview I prepare a separate Google Doc. It’s a template I’ve created, which I customize for each interviewee based on the research I do beforehand. Here’s what it looked like for my recent interview with Louis Gagnon at Audible.com. 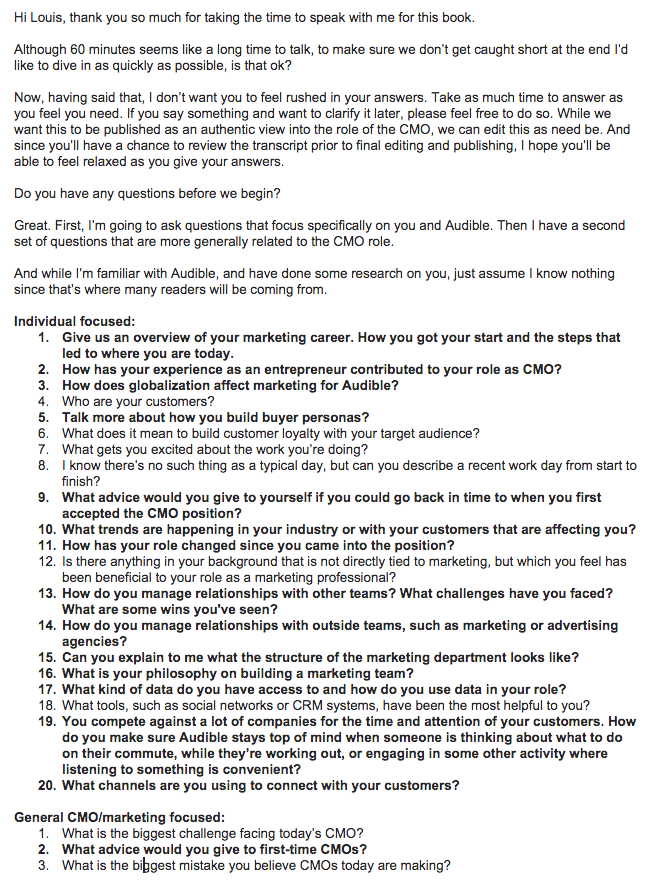 I’ve got the first part memorized at this point, so I can say it naturally. But I keep it there just to make sure I get those first points in and set the stage for the rest of the interview.

The reason some questions are in bold and others aren’t is because they all start out unbolded, and then as I go through the interview I bold those I’ve already asked, or which have already been covered. Many times in answering one question, the interviewee will inadvertently answer another question or two, and of course I don’t want to accidentally as the same question twice.

These questions never get answered in the order they are on this page. I want the interview to sound natural, and so typically the interviewee will say something while responding to question #5 and I’ll realize “Hey, that leads perfectly into question #17,” so I skip to #17. If I have that thought in the middle of their response, I’ll select question #17 so that once they’re done answering #5 I already know what my next question is going to be, and I can concentrate on what they’re saying rather than trying to remember what question to ask next. This system seems to be working quite well.

I schedule 60 minutes for each interview. Typically after chit-chat and introductions, that means we have around 50 minutes for the substantive portion of the interview.

Once the interview is done, I get the mp3 file and send it immediately to a transcriptionist referred to me by Apress. I tell her when the relevant part of the interview begins, since sometimes there is 5-10 minutes of audio before we really dive in. One nice feature of UberConference is that it doesn’t start recording until the other party gets on the line, so I don’t have 10 minutes of hold music. And yes, I always get on the conference line 5 to 10 minutes before our scheduled time just to make sure the interviewee stands zero chance of getting on before me and not finding anyone there. The last thing I want to do is have them give up and then have to reschedule. It’s hard enough to get to these people in the first place.

The transcriptionist then returns a typed up version of the interview to me in Word, and then the editing process begins. But that’s a topic for another post.

In doing these interviews I’m definitely seeing patterns in the responses. Everyone talks about how critical data is, before I ever bring it up. Everyone talks about how the role of the CMO is not just coming up with creative ads or design to promote the brand, but how they are focused on customer acquisition and retention, which means lots of overlap with sales and tech departments. Being the CMO involved a lot more data crunching, math, and statistics than one might think. It has been a great experience for me to get this insight through these interviews, and I’m excited to share it all with you when the book comes out in March, 2016.

Until then, I’ll be sharing more updates about the book and the process of writing it here on this blog. To stay in the loop make sure you’re signed up for my weekly email.

This looks awesome Josh! Can’t wait to read it when it comes out.

Great article! Thanks for all your tips and look forward to your book.

Hi Josh, Thanks for sharing your experience writing a book. I am considering writing my first book in 2017. I am wondering if you also used video conferencing to conduct the interviews or was it just over the phone? Do you think there is an advantage to one or the other? I doubt I will be able to sit down with may people in person so just wondering what the best approach is for long-distance interviews. Thanks again! T.J.

Hi TJ, I didn’t do any video conferencing, partly because I was often doing these interviews at 2 or 3 am my time to accommodate the interviewees and didn’t want them to see how tired I was, but mostly because it would have been just one more piece of technology that could go wrong, and I don’t think having us see each others’ faces would have helped anyway. I recommend doing whatever is easiest and most comfortable for the person you’re interviewing unless you have a compelling reason to do otherwise. 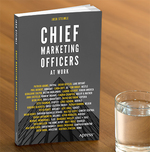 Do NOT follow this link or you will be banned from the site! wpDiscuz
4
0
Would love your thoughts, please comment.x
()
x
| Reply