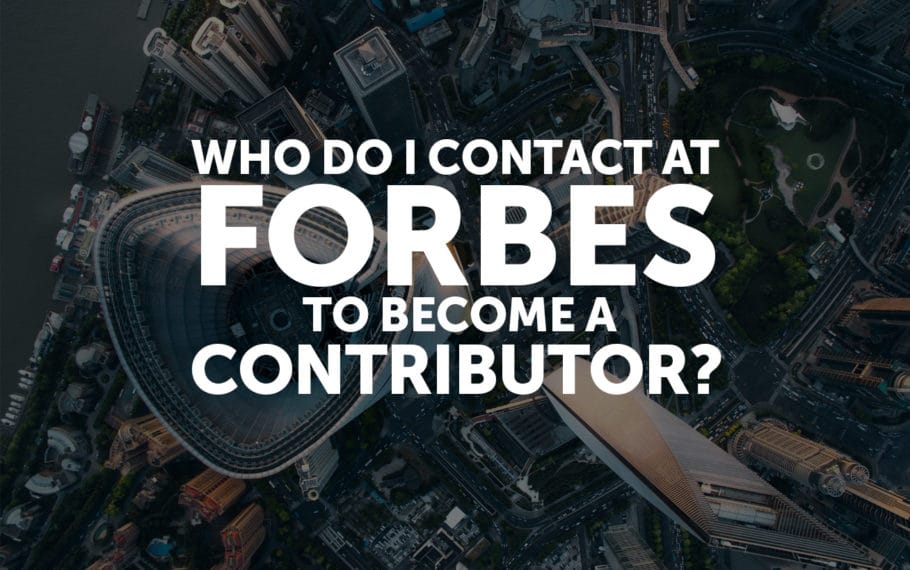 I’ve already answered this question to one extent or another in the context of answering other questions in these places:

But let me get really direct about this–there is no One Email or certain person at Forbes whom you contact in order to become a contributor at Forbes. It’s different at Entrepreneur or Inc.

Most of the people I know who were recently signed up as contributors for Forbes were invited to become contributors. This is the method I endorse most heavily–do something or write something that will get you noticed by Forbes and let them come to you.

I got into the Forbes contributor program because I got an introduction from a friend. It’s also a great method, if you happen to have that kind of friend.

However, if you don’t have friends at Forbes, and you’re too gung-ho to wait around for Forbes to notice you, then contact the editor of the section you want to write for. It’s not too hard to figure out who they are. I just did a search on Google for “forbes entrepreneur section editor” and got this: 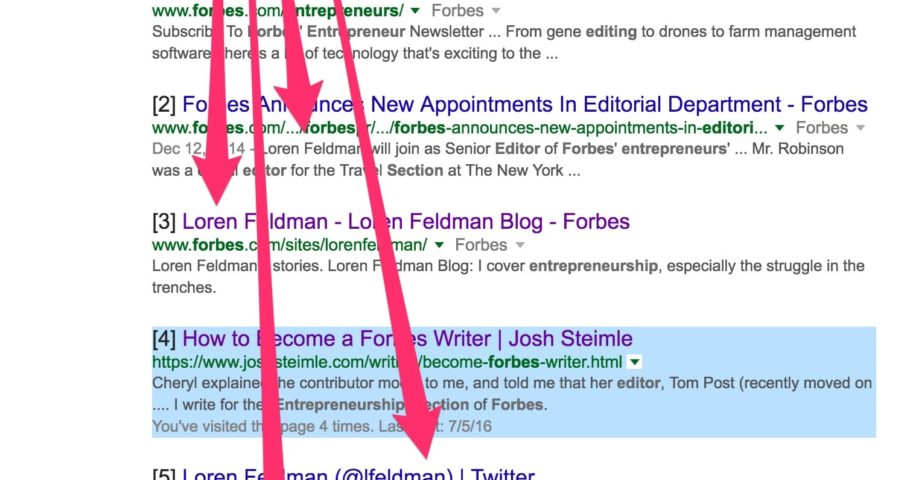 I’m no detective, but I’ll give you four guesses as to who the editor of the entrepreneurs section is at Forbes. If that’s not the section you want to write for, do a similar search to figure out who the editor is for the section that’s the best fit for you.

Once you know who the editor is, you should probably proceed very cautiously, carefully, and send them a huge email telling them why you’re such a great writer and business thought leader and how badly you want to write for Forbes and how it will help you so much and be a great thing for you and feed all the starving children in the whole world, right? Wrong!

“But Josh, if I don’t tell the editor how awesome I am, how will he know?”

Think about this from the editor’s perspective. How many emails do you think he gets every day from desperate writers who want to become contributors at Forbes? Heck, I get tons of these emails and I’m just a guy who wrote a few articles for them, I don’t even work there. He might be getting 50 such emails per day. Every one of those emails is saying “I’m awesome, look at me!” and the editor has to decide if he even wants to take the time to read any of them, or if he’ll just delete them all and then go out searching for experts who are already out there doing great things and writing in other places and recruit them. After all, if they’re already writing somewhere else then he knows he can bring them on at Forbes and he won’t have to do any training, they can just go.

If I were trying to get on at Forbes today, here’s what I would do:

1. Read what the editor is writing.

3. Write 10 posts that you think are on par or better than the articles the editor is sharing on social media. Publish these on your own blog, on Medium, and on LinkedIn Pulse. Practice driving traffic to them and getting people to engage with them and leave comments.

4. Once you have three posts that have gotten thousands of page views and 50+ comments, send those three to the editor and say “Hey, I’d love to write for Forbes. Here are three of my best performing posts that have attracted [number] views and [number [comments]. I can post to Forbes at least once per week, I can bring a following with me, my focus is on [narrow topic], and you won’t have to spend much if any time editing my work or managing me.”

That’s it. Try it and let us know if it works for you.

Update: Due to popular demand I’ve launched an online course + community to help those interested in becoming Forbes contributors.

Excellent advice and well done on the infographic. My experience with freelance writing suggests that the “generic” email addresses such as “Editor@” yield no results so we are in agreement there.

What are some examples of activities that meet this criteria: “Do something or write something that will get you noticed by Forbes and let them come to you.”

From my own experience, when I first met an editor at Forbes his words to me were “I’ve been reading your blog and I love it. I want you to write the same stuff except publish it on Forbes.” But a better way to figure out what Forbes likes is to read what the contributors are publishing and what’s doing well there. Then try to emulate it, but publish where you can, i.e. your own blog, Medium, LinkedIn Pulse, etc. If you can write what Forbes is already publishing and compete head to head with it then you’ve got it made.

Why would I want to write what Forbes is already publishing – and who would want to read it? I’m focused on creating value for my readers.

It’s not that you publish the same content, only the same type of content. Content that fits their style and what readers expect from Forbes. Otherwise you’ll never get signed up in the first place.

Well said Bruce. The pseudo addresses and identities submit no result, however Forbes platform is a start for such businesses to grow and get noticed aswell.
Also check out the website link below that does the best logo design website for their clients.
http://www.logoladz.com

Great advice as usual Josh. Gets me thinking about my own writing and how diverse my pieces have been, so the tip to focus on one narrow topic, really stands out for me. Something I’ll really have to, like you say focus on. Thanks again

Read one of the linked articles tonight. I wanted to ask about this statement: ” But perhaps the most tangible, direct benefit was that during the first year I was writing for Forbes my agency grew revenues by over 1,000%.”

Can you explain this growth further? How do know the link between the activities? Did every new client in the period refer to Forbes? Did you use some type of analytics tracking? I’m curious to understand this further because it is relatively uncommon to see such a clear example of content marketing ROI (in my research anyhow).

I knew there was a link because; 1) I wasn’t doing anything else for marketing, 2) everyone was mentioning how they found us. We actually grew something like 1,300% during those 12 months, but I round down to be conservative on how much came from Forbes. But it was probably the whole 1,300%. At best perhaps we got 50% from organic SEO and 25% from word of mouth during that period.

Have another questions that’s not exactly relevant to Forbes but still on a topic of contributing to large publishing platforms: What are you thoughts on Huffington Post’s latest move to Athena Platform? Does it make contributing to Huffington Post less valuable or still worth doing? Looking forward to your thoughts! Thanks!

HuffPo has the same brand today that it had yesterday for 99.99999% of the world. Most people have no idea of the changes that have happened or that are happening, and even if they knew they wouldn’t care. So yes, I think the value of being a contributor on the platform is the same today as it was yesterday, and unless the new powers that be really mess things up fast, it will remain that way indefinitely. I guarantee the vast majority of HuffPo readers don’t know a thing about the publication other than its name and that there are articles on it that are interesting. They could care less about who owns it, who controls it, the platform, etc.

Similarly, when Forbes was purchased recently by Asian investors I don’t think much changed at Forbes or that anyone cared too much. As far as I know it hasn’t impacted the Forbes brand amongst readers, and when it comes to the value of being a contributor somewhere it’s two things; 1) reach, or impact (how many people read what is published there and how they react to it), and 2) brand (how it impacts others when they find out you’re associated with the brand).

Wow! Thank you for taking the time to reply!

Totally agree with both points. As an SEO professional, I am guilty of only focusing on what benefits a platform would provide from the search engine perspective (domain authority, link juice, follow/nofollow, etc.) forgetting to take into account (…and a lot of times ignoring) the branding opportunities it might deliver.

Thanks again for sharing your thoughts!

Great insight … very valuable. Much thanks!

This is gold. Thanks for the author

Thanks for such a nice guide, What you other points think i should be taken care after publishing on Medium and Linkedin Pulse?

There’s no great magic to it. Write great content that delivers real value, deliver it to the audience that will value it, through the channels where that audience wants to receive it, and make it easy for that audience to interact with the content and share it. But first, focus on creating great content.

Josh, please do contact me. I wanted to share some of the key insights in the field of artificial intelligence.

How to get rid of 11 million illegals: ICE/CBP should do investigations on hotels, small restaurants and other businesses. When they find illegals, FINE the business owner or contractor $25K per illegal person and offer the illegals these options:

2) they go through THE PROCESS TO GET LEGAL RESIDENCE AND SUBMIT TO HAVE THE TAXES OWED IN MUTUALLY AGREED, PRE-ARRANGED AND PRE-APPROVED MONTHLY PAYMENTS or

3) IF THEY ARE TOO OLD, HAVE THEIR FAMILY PAY THE TAXES OWED IN THE SAME, MUTUALLY AGREED, PRE-ARRANGED AND PRE-APPROVED MONTHLY PAYMENTS AND

4) IF THEY REFUSE TO PAY THE TAXES OWED, IMMEDIATELY DEPORT THE WHOLE FAMILY BACK TO THE POLICE (AND ONLY TO THE POLICE) OF THEIR NATIVE COUNTRY.

Hey Josh – Thanks for this! I want to write for Forbes Woman. Do you think the same criteria would apply or you recommend to change it up a bit? Thanks very much! Cheers, Anushae

For sure. It’s more or less the same actions you would take to get into any publication.

Thank you so much Josh! I have you on LI and your content there is phenomenal! What’s a good way to stay in touch with you? Cheers, A

© Josh Steimle 2021 All Rights Reserved
Do NOT follow this link or you will be banned from the site! wpDiscuz
24
0
Would love your thoughts, please comment.x
()
x
| Reply